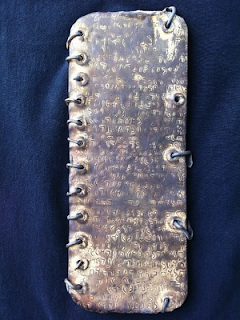 The latest news on the Lead Codices is that the official "academic team" (who I assume has Elkington somewhere in its midst and apparently still remains anonymous -- yeah) has recently claimed the following:

Approximately two months ago, Hassan Saida, the Israeli Bedouin who smuggled the Jordan Codices into Israel, telephoned to inform the team that he and his cohorts had made 500 forgeries of various of the codices and put them into the Jerusalem market. We didn't think too much of it as he tells lots of tales; however, one of team members was sent these two photographs by someone who purchased them in Israel. To those who have seen the real McCoy, these were obvious forgeries. However, even comparing them to the posted photographs, the difference is all too apparent. Below are some observations made by one of the metal experts assisting the team. We expect more will materialise in due course.

Interesting thing about the above image that came with the release: If it is based off one of the codices, it does not resemble any of the codices released thusfar. At first glance, this one is in a much more obvious Hebrew/Aramaic-flavored script rather than the seemingly "Paleo-Hebrew/Aramaic/Coptic" mix of the others. (Something that their "metal expert" noticed as well. I wish I had a name to put to their words.)

I'm going to chew on this text a bit and see what else there is to find, and I invite others to do the same.


David Elkington is not letting this die – as now the Bedouin who first smuggled out the ‘Lead Codices’ is telling everyone that he has created 500 forgeries. Of course, the ‘real’ lead codices is what David has… Do you know the mental mind-flips it takes to state that that guy who is telling everyone that he has made 500 forgeries is now lying and that your copy is the only real copy?

UPDATE 10:10AM: I have resurrected the Lead Codices topic page on The Biblioblog Reference Library here and I'm in the midst of updating it.


It looks to me as though someone is realizing that the gig is up and is trying to prolong the news cycle on these items. Could it be that the next step will be for David Elkington to announce that oops he accidentally gave Peter Thonemann one of the fake codices but the rest in his possession are genuine? Meanwhile, we have an admission that the source of the codices "tells lots of tales" and that he has the resources to produce fake metal codices.

UPDATE 11:50 AM: A second image of the "fake fakes" has been posted. This one has a script (or rather several scripts, as there are at least three sets of handwriting) much closer to the codices released thusfar, has some identical iconography, such as the coin image in the bottom left. 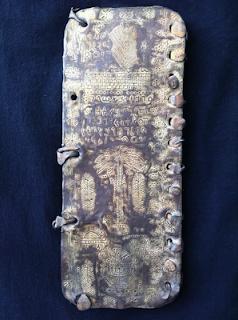 However, the text in these "fakes" is much clearer. I'm going to see if it can be matched up to some of the "original" lead codices and use them as a basis for getting a better look at this text.

UPDATE 9:06PM: Well, there is now very little doubt that the "real" codices and the "forgeries" were cast from the same mold. Where Tom Verenna was the first to point this out in detail, take a look at the following gif:

What you're seeing is a picture of one of the "genuine codices" sliding back and forth over the Herodian coin motif found on the bottom left corner of the "fake codex" image. The only thing I've done was keystone it to compensate for camera angle (which wasn't perfect).
As you can see, they are identical. And when I say identical I mean that it looks like a case of "they've-been-cast-from-the-same-mold identical" (or in this case, from the same impression).
I am sure that Elkington and his crew will cry out, "That's because it was taken from the original!"

I cannot help but agree: It is my opinion that they were both made using the same set of tools from the same workshop working from the same impression molds. :-) All that needs to be done now is to test the metal of these "fake codices" and compare that analysis with those of the "real codices."
I look forward to the results.

PS: The entire release is archived below, sourced from their Facebook page:


Approximately two months ago, Hassan Saida, the Israeli Bedouin who smuggled the Jordan Codices into Israel, telephoned to inform the team that he and his cohorts had made 500 forgeries of various of the codices and put them into the Jerusalem market. We didn't think too much of it as he tells lots of tales; however, one of team members was sent these two photographs by someone who purchased them in Israel. To those who have seen the real McCoy, these were obvious forgeries. However, even comparing them to the posted photographs, the difference is all too apparent. Below are some observations made by one of the metal experts assisting the team. We expect more will materialise in due course.

1. The holes are too clean.
2. The beige 'corrosion layer' looks like it has been sprayed on and then cleaned off.
3. The holes have raised edges and looks like they have been punched hard all together against a die with a slightly larger diameter. Not like the originals.
4. The drawing on the tree is too fine and crisp - the detailing seems wrong - it is almost like they have been cast onto a harder material than the originals. It is also possible that these have been pressed and then distorted - the best indication would be a view of the reverse of each sheet and seeing if there is variation in the thickness of the metal from casting.
5. The edges look like they have been cut round the pattern very closely - particularly the dots - not the same as the previous ones which were not cut cleanly around a pattern.
6. The format looks wrong - too long and thin.
7. The seals - look like they have been struck at the ends - like coins. I didn't see any of that before.
8. The background colour looks like it has been blowtorched - it is less rusty looking than most of the originals
9. They do not have the same build up of accretions of scale and calcium.
10. There is little or no evidence of wear or pressure based slow distortion - although there are a few damaging marks. Some of the wear may have been introduced on the mould. Unlike the originals, which looked like they were cleanly cast and then deteriorated over a long time.
11. The seals have been put on after the corrosion layer has been sprayed on and cleaned off. There should be layers of corrosion sealing them in to the surface.
12. The wires look hammer beaten - not a bad representation.
13. There are a few areas where the 'blue' of the lead shows through.
I can't see the backs but your sealed books were sealed a very long time ago and opened up to clean and shiny lead - I bet these don't.
I wonder if there are any rotational tool marks or bypass shear 'seams' along the edges where they have been cut.
The handwriting is very different and looks a bit too random. I haven't attempted to look at the symbols - although they are more ragtag. I would say that a different person did the drawings from the script - they just look different.

The 8 pointed stars have 12 or 16 points. Some of the other symbols are slightly different and may have a completely different meaning or interpretation.
I would also reckon on the metal still being malleable. Not hard, flakey and cracking. I expect they also smell and taste different. These may have been dipped in acid and coloured with mineral pigments.
OK, I might be taken in if I hadn't seen all your photos. But they don't look right to me. A good mishmash of some of the symbols and text on the photos you and others have published on the Internet.