A while back, Codex (the blog of Tyler F. Williams, the Chair of the Religion & Theology Department and Assistant Professor of Old Testament/Hebrew Bible at Taylor University College in Edmonton, Alberta... whew what a run :-) ) did a both hilarious and sad (and hilariously sad) study on mis-translated Hebrew and Aramaic tattoos. 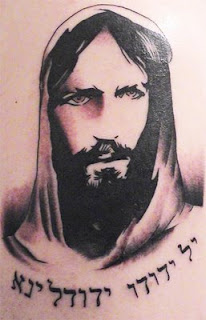 The passage below is supposed to be taken from the Hebrew of the Song of Songs "I am my beloved's and my beloved is mine."

It is backwards. It should read:

אני לדודי ודודי לי
Ani ledodi vedodi li
Jesus appears to be scowling in disapproval.
Additionally this tattoo is on the arm of a man. "Dodi" is the masculine form of "beloved" so this backwards text, even when corrected means "I am my beloved's (masculine) and my beloved (masculine) is mine." Perhaps the bearer was trying to refer to Jesus? If so that would make sense. If they were referring to their sweatheart... not so much.

As if this one was bad enough, it looks like someone copied it for this tattoo: 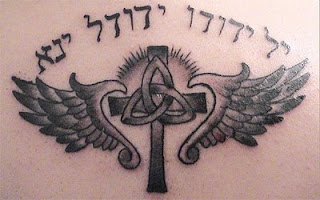 Again backwards, and wrong gender.
If you are thinking of getting a tattoo, I cannot stress enough how serious such an endeavor is. I have helped over 300 people get tattoos done in the last year as a translator, and when you decide to get a translation done I recommend that you strive for the following:
--Steve Caruso